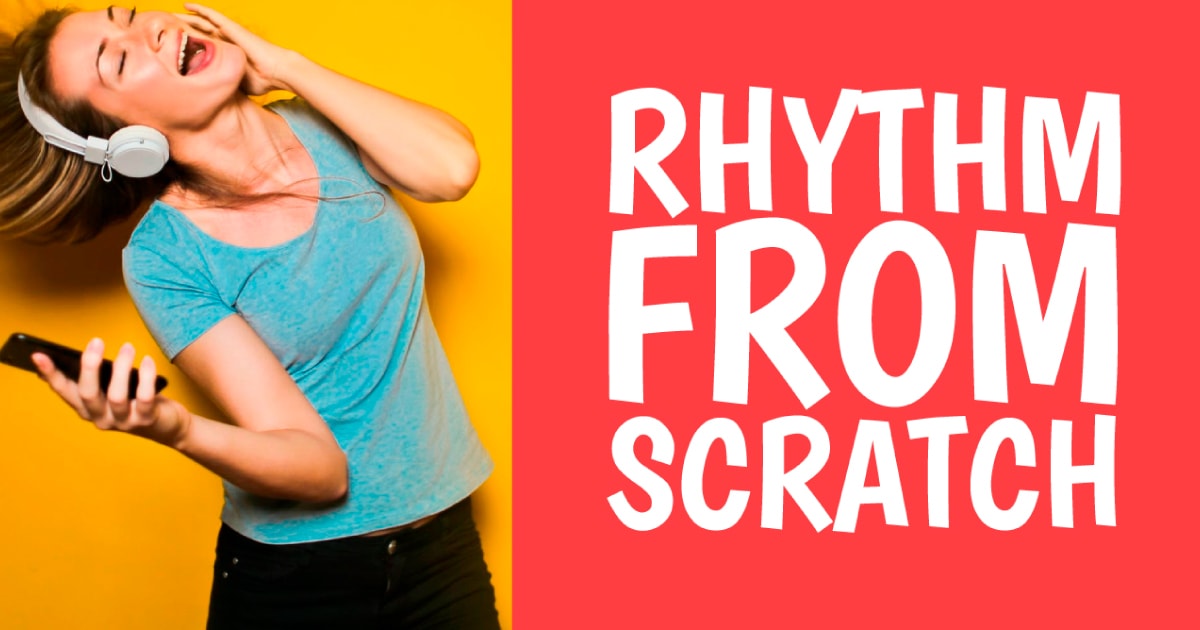 Hello, friends! Welcome to a new series of lessons about rhythm. In the three classes in this section, you'll learn how to read and write rhythm from scratch using the note values. I'm sure you'll love these lessons because we'll use online tools to practice. Let's begin.

Have you noticed that musicians begin counting from one to four before they start playing? They do this because they want to establish the speed at which everyone should play and show when they should start playing so everyone starts playing at the same time. But have you wonder why they count to four? I'll answer that question later. In a future lesson, you'll learn that depending on the song, you may need to count to another number. In the examples forthis class, we'll always count from one to four before we begin playing.

A perfect rhythm using the metronome

When we count, we might not be that precise. Therefore, we use a tool called a metronome, which is a device that produces a constant and precise sound at the desired speed. The metronome works like a heart, because it produces a constant beat that forms the foundation for the music that will be played.

We have created for you an online metronome at sessiontown.com. It has some advanced features for the study of complex rhythms. You can find the link to the virtual metronome below the video. Let's hear the metronome playing four beats. Click on the Play button to start the metronome.

You can set the speed of the metronome by changing the number in the tempo column. If you don't know the BPM number of a desired speed, you can click on the TAP button several times at the speed you need, and the number will be calculated automatically.

You will find that some compositions use an Italian word to mark the tempo. Words like andante, allegro, moderato, presto and others indicate the speed of the rhythm in a more general way. For example the word "presto" means "quick," and any speed between 170BPM and 200BPM will work. It is up to the musician to select the exact speed between the recommended numbers.

The note values: signs and symbols

Let's begin with some examples.

As you can hear, every symbol on the staff sounds at the same time asevery beat of the metronome. The duration of each sound is represented bya symbol. The symbols used to represent the duration of sounds are called note values. The British name used for each note value that you see on the staff is thecrotchet, while the American name is the quarter note. On the staff, you can see eightquarter notes or crotchets. We can conclude that each quarter note or crotchet lasts one beat.

In the example, you can see four quarter notes followed by eight new symbols. The American term for this new symbol is eighth note, but it has nothing to do with the fact that there are eight of them on the staff—you can have only two and the name would still be eighth note. The British term for this new symbol is quaver. Each eighth note lasts half a quarter note. We need two quarter notes or quavers to complete one beat. The visual difference with quarter notes is that eighth notes can be grouped together with a horizontal line called a beam. Eighthnotes don't always have to be joined with a beam. The purpose of the beam is to facilitate reading. This is how they look without beams:

The symbol that replaces the beam is called the flag. The sound doesn't change if we use beams or flags — it's all about making reading easier. Every time eighth notes are together in one or two beats, they should use the beam instead of the flag.

In the following example, the 16 new symbols at the end are called thirty-second notes or demisemiquavers.

As you can see, every new note symbol that I teach you lasts half of the previous note we discussed. The sixty-fourth note, or hemidemisemiquaver, lasts half a thirty-second note and uses four beams or flags.

Half notes or minims and whole notes or Semibreves

However, thequarter note we started with isn't the symbol that represents the longest duration. Let's hear a new example:

The two symbols at end of the staff are called half notes or minims. The visual difference between this note andthe quarter note is that the head is empty. This symbol represents a double quarter note, which means it lasts for two beats.

The whole note or semibreve lasts four beats, and it is visually differentiated because it doesn't have a stem:

Music tends to organize rhythm with patterns that repeat continuously. The natural accent in those patterns let us organize the music in small segments or groups of beats that we call measures or bars. A lot ofmusic is created with an accent or strong beat every four beats, followed by three weak beats. That is why we count from one to four before we begin playing. Have you noticed that the metronome plays an accent every four beats?

The group of four beats starting with the accent is what we call a measure or bar. On the staff, we use a vertical line called the barline, or simply the bar, to divide music in measures. Because we are using measures of four beats, the sum of the note symbols in each measure must be exactly four beats. When the music ends, we use a double line called a final barline.

Many compositions use three, five, seven and various other numbers of beats per measure. To keep it simple, the examples inthis lesson use four beats per measure. In a later video, you will learn more about other types of measures.

Music rests and its signs and symbols

In music, it is as important to play music as it is to be quiet. Every musician has to learn to be quiet with rhythm. We use rests to know when to be silent. Each note symbol has a corresponding rest.

The example has threemeasures. The first measure contains two quarter notes, followed by a quarter rest or crotchet rest, and then another quarter note on the fourth beat. The second measure containsa whole rest or semibreve rest, which means we must be quiet for four beats. The third measure contains a half note that lasts two beats and then a half rest or minim rest that also lasts two beats. As you can see, the quarter rest seems like a lightning bolt, the whole rest is a small rectangle below the fourth line, and the half rest is the same small rectangle but above the third line.

The eighth, sixteenth, thirty-second and sixty-fourth rests are represented as you see on the following image. The rests are not joined with a beam as we do with the notes. 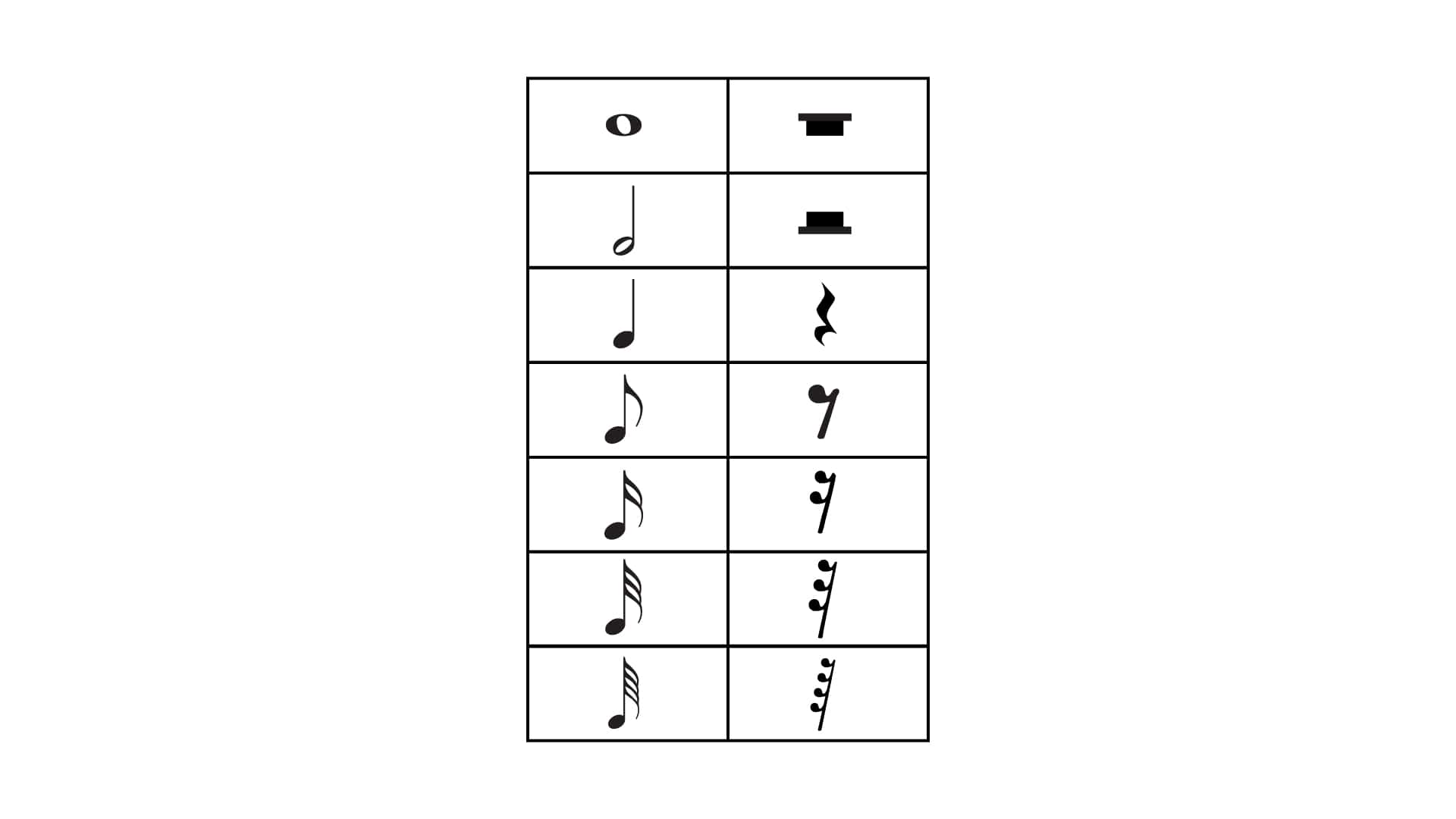 I recommend that you pause the video, and draw and memorize the rests.