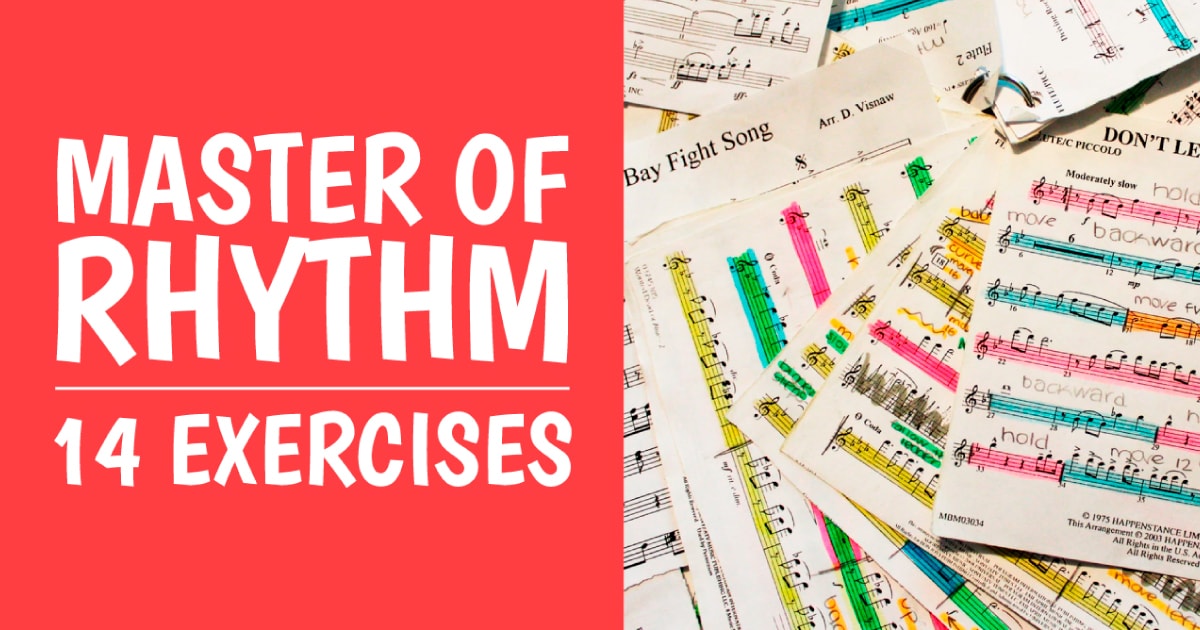 Learn music rhythm with this awesome video and practice with +14 examples. You will practice using rhythm examples that teach you topics such as triplets, doted notes, staccato and ties.

Hello, friends! In this lesson, we will use different rhythms to allow you to learn how to read and write music on the staff. Before we begin, I recommend you complete the musical symbols and values lesson to fully understand the content of this class.

Remember that quarter notes or crotchets last a beat, and eighth notes last half a beat. For this lesson, we are not going to pay attention to the pitches of the symbols. We will focus on the rhythm. Let's produce the rhythm of each example with our voice.

I use the syllable "ta" to say each note, but you can use any word or syllable that feels natural to you. What is important right now is precision with rhythm. For example, quarter notes must last the entire beat—you cannot stop them before. It must be clear that eighth notes last half a quarter note.

#2. Whole and Half notes

If you watched the previous lesson, I know you can say the rhythm of the following example without my help. Remember that half notes or minims must last two beats, and whole notes or semibreves must last four beats. Try with the metronome, but remember to count to four:

Repeat this exercise until you feel that these note values are easy.

Do you remember rests? The following exercise uses an eighth note rest and then an eight note per beat:

As you can hear, every eighth note is played after the beat. This is called offbeat or syncopation.

In the following example, we introduce sixteenth notes or semiquavers:

I say "ta – ca – ta – ca" for four eighth notes, but you can say whatever you prefer. Remember that music must have strong and weak beats, so it is important to accentuate the first note on the first beat and the first sixteenth note in the group of four.

Say the rhythm with the metronome.

Now let's try a very common combination. Two sixteenth notes followed by an eighth note per beat. As you can see, sixteenth and eighth notes can be grouped together with a beam if they are on the same beat. As always, each note value is differentiated by the number of beams at the end of the stem. Let's hear:

When I was learning this combination, I used to think of a galloping horse to remember the sound. Try with the metronome.

This exercise is similar to the previous. The difference is that each beat begins with an eighth note followed by two sixteenth notes.

Let's say we want to write a song that begins with a half note. So far, we have completed two beats of the first measure. Then, let's add a quarter note. We have completed three beats of the first measure. Remember that each measure can only have four beats. Let's say we need a note that lasts for two beats, like a half note. What do we do? We cannot add a half note in the last beat because that would be exceeding the limit of the measure with a total of five beats.

To solve this problem, we can use a quarter note on the last beat and then add another quarter note in the first beat of the next measure. Then we can use a curved line called a tie that joins two note values to add the duration of the two notes. Two quarter notes tied together last the same amount of time as a half note. Now, let's say we want to add a note that lasts three beats. The solution is simple: we can tie a quarter note and a half note. The tie will always be over or under the head of the note, at the opposite side of the stem. It sounds like this:

Try with the metronome.

The following exercise has a dotted quarter note followed by an eighth note:

These sixteenth notes can be tricky. Try to be as precise as possible.

So far, we have learned that every note value has half the duration of its longer note value. This leads us to a problem. Imagine that we want to write three notes that have the same duration on the same beat. With the note values I have taught you, there is no way of doing that. To solve this problem, we use a modifier called a triplet. A triplet of any note value takes the same time of two of the same note values without the triplet. For example, an eighth note triplet will take the same time as two eighth notes. In a triplet, the three notes must have equal duration.

Compare and learn the difference between eighth notes and eighth note triplets.

The same way we used triplets before, we can group note values to divide the beat in any number of equal divisions. We call this grouping of note values a tuplet. A triplet is a tuplet. The quintuplet is another tuplet where five note values take the time of four. If you need to write five notes with the same duration on one beat, you would use a sixteenth note quintuplet.

As I have mentioned before, it is very important that the sum of the note values in any measure equals four beats. There is one case where this rule doesn't have to be followed, and that's in the first measure. A song does not have to begin on the first beat—it can begin on any beat of the measure. The following example begins in the last beat of a measure:

Let's say the rhythm. In this case, we count to three to begin because of the anacrusis.

Sometimes, when there is anacrusis, the last measure is also incomplete in terms of beats. But if we add the note values from the anacrusis with the ones in the last measure, they equal four beats.

Another duration modifier is the staccato. It's a tiny circle or dot similar to a dotted note but located above or below the notehead. It means that the note should be played quickly and separated from the surrounding notes. Let's hear an example:

Each staccato note must be short enough to be separate instead of playing until reaching the next note. Let's do it with the voice.

Let's practice everything you have learned so far. This time the metronome will be alone first. Try to read it all aloud with your voice, without any help, and pause the video if necessary. I know it might seem too much at first sight, but you have all the knowledge needed to read this. Use our online metronome on a slow setting if you think the following metronome is too fast.

You must be wondering what the two number fours at the beginning of the staff are. These numbers are called the time signature, and they indicate the meter or organization of the beats. The whole rhythm depends on those numbers. In the following lesson, you are going to learn everything about time signatures with examples of popular music.

I recommend that you repeat this lesson using the online drums you can find at sessiontown.com. Use it in combination with the online metronome to practice each exercise at different speeds. You will find the links below the video. You can also use any instrument you have.

The most important thing you can do right now is to practice each example from a low tempo and then build up the speed.

If you use our virtual metronome, you can click on the Add Automation button to add rows that will be played after the number of bars or measures are completed from the first row. This allows you to use an automatic metronome that plays at a different tempo every certain number of measures. For example, set the metronome to 60 BPM for three measures or bars, then add a new row and set it to 70 BPM for three more measures. You can keep adding all the rows you need to study.